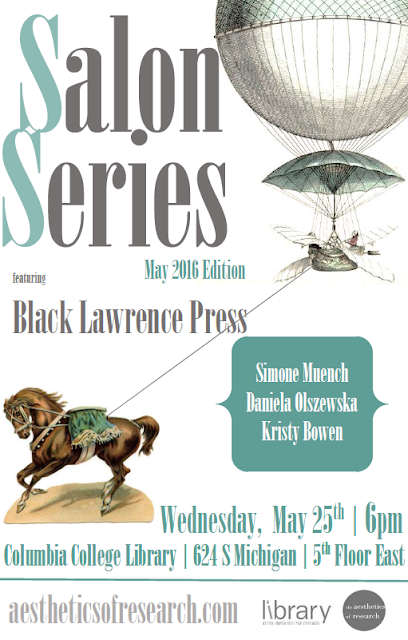 The Aesthetics of Research Salon Series is a regular schedule of readings / discussions with authors about their work and the materials/ inspirations from which that work springs. Each month spotlights the authors of a different press. organization, reading series or literary publication.
This month's feature's include Black Lawrence Press authors:
SIMONE MUENCH
Simone Muench is the author of five full-length books including Lampblack & Ash (Sarabande, 2005), Orange Crush (Sarabande, 2010) and Wolf Centos (Sarabande, 2014). Her chapbook Trace received the Black River Award (Black Lawrence Press, 2014). She is a recipient of a 2013 NEA fellowship and The 2014 Meier Foundation for the Arts Achievement Award. She serves as faculty advisor for Jet Fuel Review, and has a forthcoming collaborative book of sonnets, written with Dean Rader, titled Suture (Black Lawrence Press, 2017).

Daniela Olszewska is the author of three full-length collections of poetry: cloudfang : : cakedirt (Horse Less Press, 2012), True Confessions of An Escapee From The Capra Facility For Wayward Girls (Spittoon Press, 2013), and Citizen J (Artifice Books, 2013). With Carol Guess, they co-authored a collection of prose poems based on the user-content-generated website WikiHow. That collection is titled How To Feel Confident With Your Special Talents (Black Lawrence Press, 2014).

A writer and visual artist, Kristy Bowen is the author of several book, chapbook and zine projects, including major characters in minor films (Sundress Publications, 2015), the shared properties of water and stars (Noctuary Press, 2013), and girl show (Black Lawrence Press, 2014). She lives in Chicago, where she runs dancing girl press & studio and spends much of her time writing, making papery things, and curating a chapbook series devoted to women authors. Her next full-length collection, salvage, is due out from Black Lawrence Press in 2016.


The Aesthetics of Research is an ongoing project dedicated to exploring the role that libraries and their collections play in artistic process, creative community building, and resource-sharing in the arts.
Posted by kristy bowen at 1:07 PM