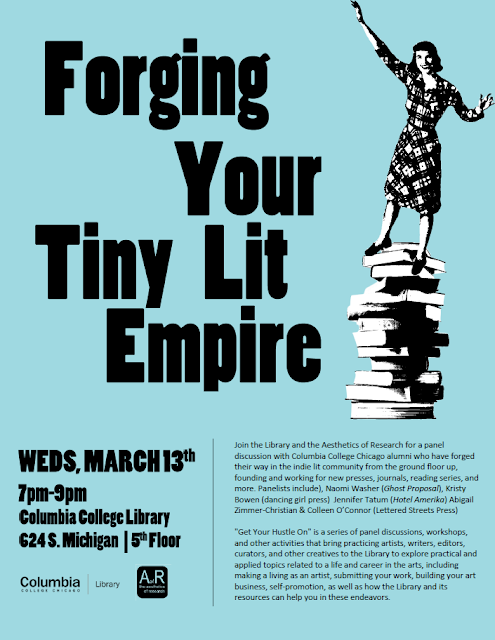 Join the Library and the Aesthetics of Research for a panel discussion with Columbia College Chicago alumni who have forged their way in the indie lit community from the ground floor up, founding and working for new presses, journals, reading series, and more.


Panelists include ABIGAIL ZIMMER is the author of girls their tongues (Orange Monkey Press, 2017) and two chapbooks: fearless as I seam (Dancing Girl Press, 2014) and child in a winter house brightening (Tree Light Books, 2016), which received the 2016 Poetry Award from the Chicago Review of Books. She is editor of the Lettered Streets Press.NAOMI WASHER is the author of two chapbooks: Phantoms (dancing girl press) and American Girl Doll (Ursus Americanus). She is also the translator from the Spanish of Experimental Gardening Manual: Create your own habitat in thirty-something simple steps by Sebastián Jiménez Galindo (Toad Press). Her work has appeared in Gold Wake Live, Pithead Chapel, Asymptote, Passages North, Essay Daily, and other journals. She has received fellowships from Yaddo, Vermont Studio Center, Studio Faire and Chateau d'Orquevaux in France, and Columbia College Chicago where she earned her MFA in Nonfiction. She is the founder and editor-in-chief of Ghost Proposal, a post-genre literary journal and chapbook press.COLLEEN O'CONNOR received her MFA in Nonfiction from Columbia College Chicago. She is the author of the chapbooks THE PRETTY THING TO DO (Dancing Girl Press) and CONVERSATIONS WITH ORSON (Essay Press). Recent work has appeared in Glittermob, Pinwheel, and Barrelhouse, where her essay "Cautionary" was a featured novella-length essay. She lives in Chicago where she was recently the managing editor of the feminist poetry press Switchback Books, and is currently an assistant editor of Hotel Amerika and co-editor of The Lettered Streets Press. JENNIFER TATUM>>>A writer and book artist, KRISTY BOWEN is currently a Library staff member and co-curator (with Jennifer Sauzer) of the Aesthetics of Research initiative. She received her MFA in Poetry from Columbia College in 2007. She is the editor/designer or dancing girl press & studio, which publishes a series of chapbooks by women authors. Her work has appeared recently in Hobart, Paper Darts, and Tupelo Quarterly. She is the author of a number of chapbook, zine, and artist book projects, as well as several full-length collections of poetry/prose/hybrid work, including SALVAGE (Black Lawrence Press, 2016) and MAJOR CHARACTERS IN MINOR FILMS (Sundress Publications, 2015). _____________________________
"Get Your Hustle On" is a series of panel discussions, workshops, and other activities that bring practicing artists, writers, editors, curators, and other creatives to the Library to explore practical and applied topics related to a life and career in the arts, including making a living as an artist, submitting your work, building your art business, self-promotion, as well as how the Library and its resources can help you in these endeavors.