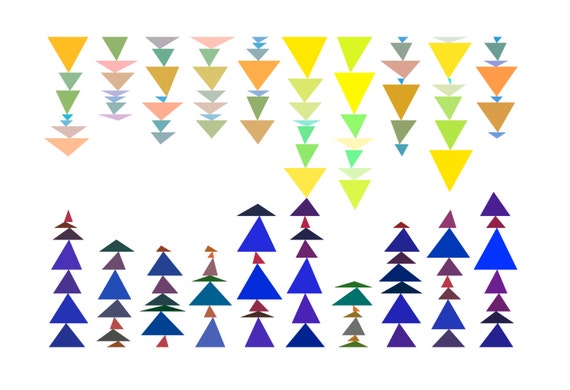 Gregory J. Matthews is an Assistant Professor of Statistics at Loyola University Chicago.  He trained as a post-doctoral research fellow at the University of Massachusetts, and he has a Ph.D in statistics from the University of Connecticut. He has been making art since 2013, and everything he knows about art he learned from his wife.  You can follow him on Twitter at @statsinthewild

While pursuing my Ph.D. in statistics, I became fascinated by the endless random variability inherent in our world and the instinctual order that is sought by our brains.  While my work concentrates on randomness, there is always a contextual structure at play.  The appearance of chaos vs. order depends heavily on the scope of the viewer.  I’m interested in the juxtaposition of apparent chaos resulting from limited perspective with structure that fundamentally exists only when something is viewed as a collective whole.

Today such buzz terms as “big data” and “data mining” reflect the root concept of this work that patterns are only apparent when viewed completely, and individual or small bits of information give only an incomplete notion of the whole.  I argue that the individual is analogous to statistics in that each individual has limited perspective and consequently many things appear to the individual to have no order.  Statistical ideas allow one to learn, in a principled manner, about a larger part of the collective picture thus exposing some of the underlying structure and making sense of the world.

Email ThisBlogThis!Share to TwitterShare to FacebookShare to Pinterest
Labels: exhibits