10 Women in Horror Must Sees 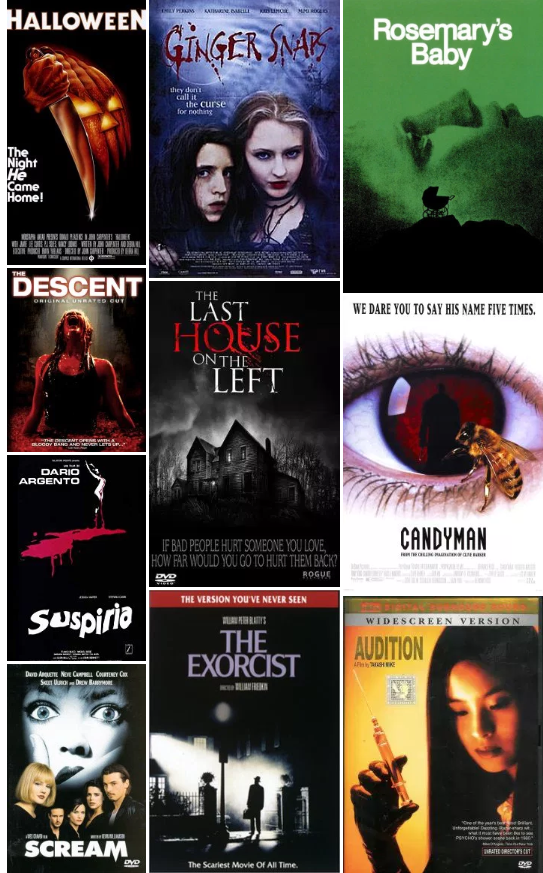 This Friday is the CCC Library Gaming Society's Annual Horror Trivia Night, this year produced  in conjunction with our Beautiful Monstrosities:  From She-Beasts to Final Girls Focus Month.    Join us Friday for snacks, trivia, and prizes! 5pm-7pm, Columbia College Library, 1st Floor!
Want to brush up on your flicks with memorable leading ladies?  We have a number of excellent suggestions, all available for check-out at the 5th floor Media Desk.

Fifteen years after murdering his sister on Halloween night 1963, Michael Myers escapes from a mental hospital and returns to the small town of Haddonfield to kill again.

A caving expedition goes horribly wrong, as the explorers become trapped and ultimately pursued by a strange breed of predators.

A widower takes an offer to screen girls at a special audition, arranged for him by a friend to find him a new wife. The one he fancies is not who she appears to be after all.

An American newcomer to a prestigious German ballet academy comes to realize that the school is a front for something sinister amid a series of grisly murders.

A year after the murder of her mother, a teenage girl is terrorized by a new killer, who targets the girl and her friends by using horror films as part of a deadly game.

Two death-obsessed sisters, outcasts in their suburban neighborhood, must deal with the tragic consequences when one of them is bitten by a deadly werewolf.

After kidnapping and brutally assaulting two young women, a gang unknowingly finds refuge at a vacation home belonging to the parents of one of the victims: a mother and father who devise an increasingly gruesome series of revenge tactics.

When a teenage girl is possessed by a mysterious entity, her mother seeks the help of two priests to save her daughter.

A young couple moves in to an apartment only to be surrounded by peculiar neighbors and occurrences. When the wife becomes mysteriously pregnant, paranoia over the safety of her unborn child begins to control her life.

The Candyman, a murderous soul with a hook for a hand, is accidentally summoned to reality by a skeptic grad student researching the monster's myth.